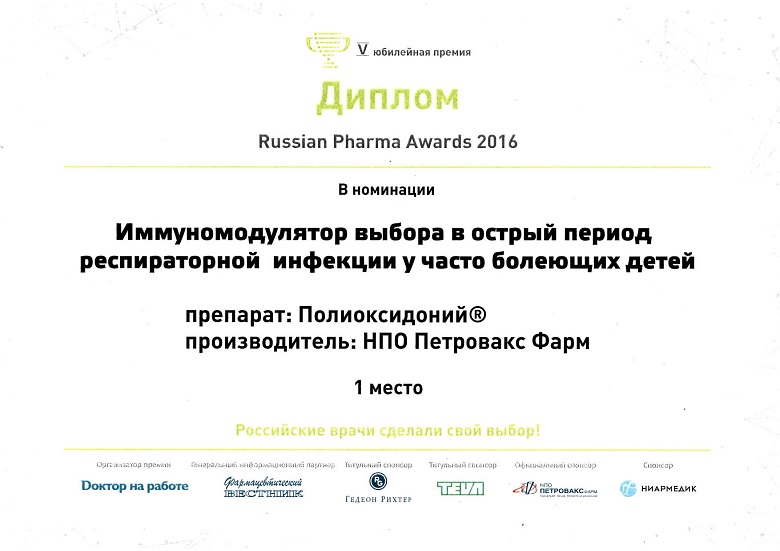 On December 1st, Moscow hosted the 5th annual awarding ceremony in the pharmaceutical and medical field, namely the Russian Pharma Awards 2016, that determined the best pharmaceuticals of the expiring year. The voting and the awarding ceremony were organized and hosted by the medical social web «Doctor at Work». The winner in the nomination «Immunomodulator of choice in acute respiratory infection in frequently ill children» was Polyoxidonium® (NPO Petrovax Pharm).

For 3 months, more than 500 thousand medical practitioners determined the winners in various nominated categories by anonymous voting. This year, the Expert Council summed up the winners for the 5 years of the awards existence and announced the digest of the best pharmaceutical nominations. For the 5th time, medical practitioners chose the best pharmaceuticals used in diabetes mellitus, ARVI, hepatitis, epilepsy, schizophrenia, depression, atopic dermatitis, rheumatoid arthritis, hypertension, endometriosis, cancer, and other common diseases as well the winners in the nominations «Company of the Year» and «The Best Medical Representative». 39 companies were the winners of the Russian Pharma Awards 2016.

«For all of us, this is not just an award but a manifestation of recognition by the medical and pharmaceutical community as well as public evidence of the fact that our Polyoxidonium® is the best pharmaceutical product in its field. It is gratifying that today, when much emphasis is on the local pharma development, Russia already has time-proved original local pharmaceuticals that are in demand not only on the domestic market but also abroad», said NPO Petrovax Pharm President Elena Arkhangelskaya.

Innovative pharmaceutical product Polyoxidonium® was registered in 1996. It is a 100% local product developed by a team of Russian scientists led by Prof. A.V. Nekrasov. Over the 20 years of this product application in Russia, the CIS, and EU, it has been recognized both by physicians and patients as a reliable, efficacious, and safe combined-effect immunomodulator. Polyoxidonium® administration has resulted in positive outcomes in treatment of many diseases in more than 1 million patients.

The Russian Pharma Awards have proved themselves to be an independent choice procedure for human pharmaceuticals from the viewpoint of medical practitioners. Being a major quality mark of a pharmaceutical product, these awards have been gaining significance, and have already gone beyond the medical community compelling not only specialist but also consumer attention. The pharma industry leaders note the value and unique character of these awards. For the 5 years of the Russian Pharma Awards existence, 175 awards in 65 nominations were handed out.