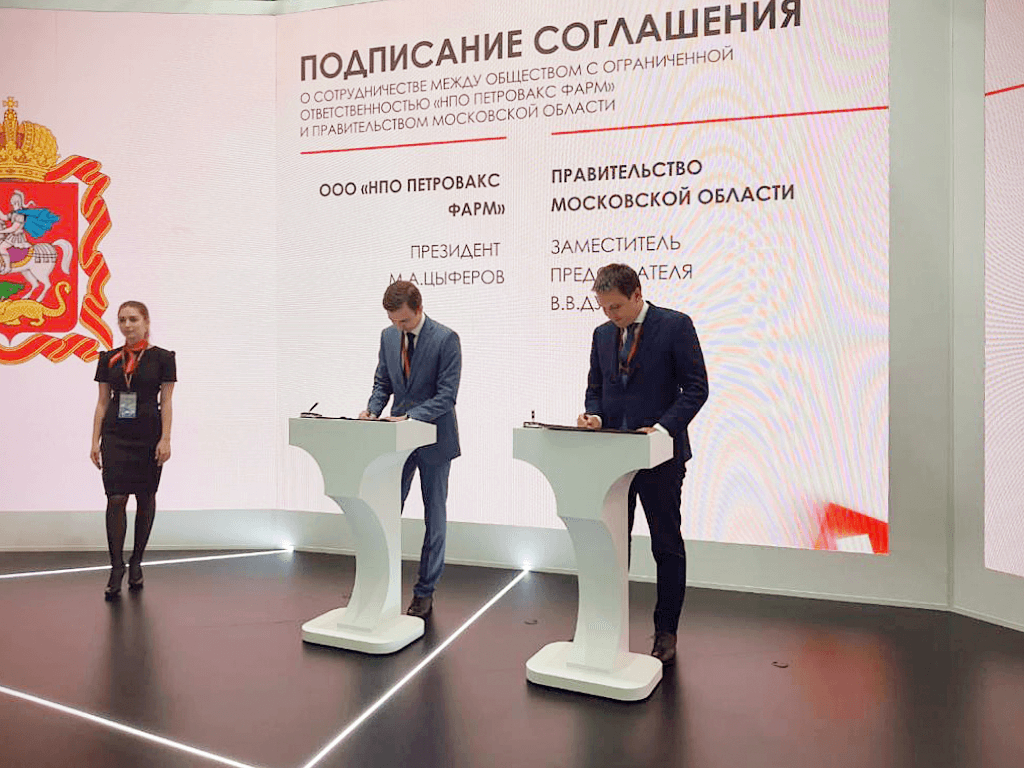 On June 3 during the St. Petersburg International Economic Forum 2021, Government of the Moscow region and NPO Petrovax Pharm LLC took part in a signing ceremony of a new cooperation agreement.

The new partnership is aimed at increasing the investment attractiveness and competitiveness of the Moscow region, by creating new jobs, increasing tax revenues and creating a more favorable environment for business activity, etc.

«This agreement is a logical continuation of our successful long-term cooperation with the Government of the Moscow region. We have already been implementing investment projects on its territory, and today we undertake obligations to even further develop economic attractiveness and the general welfare of the region. By 2025, we plan to invest 11.6 billion rubles in pharmaceutical production, creating around 400 new jobs».
Mikhail Tsyferov, President of Petrovax

The project consists of expanding the high-tech biopharmaceutical capacities of Petrovax in the Moscow region to the production of socially significant medicine and vaccines. The implementation will be organized to two stages: the first stage, planned to be completed this year, will see a construction of a fourth production line. The potential product for the new line will be vaccine for the prevention of coronavirus infection. The second stage will comprise the construction of a full production cycle biotechnological facility capable of synthesis, creation of genetically engineered medicine and recombinant vaccines. The latter stage will be implemented in 2025.

The NPO Petrovax Pharm LLC facility for manufacturing of APIs and finished dosage forms was opened by the Petrovax company in the Moscow region, Podolsk, in 2008. Investments in the construction of the enterprise amounted to over 2 billion rubles. For over 10 years (from 2009 to 2019), the company's investment in production development has exceeded 2.7 billion rubles.

The production operates in full compliance with Russian and international GMP standards. The modern pharmaceutical manufacturing complex is one of the most high-tech biopharmaceutical enterprises in Russia. Petrovax capacity is more than 160 million dosages of immunobiologicals per year.

The company actively participates in social programs and charity organized in the region, provides targeted assistance to public organizations and medical institutions. In particular, in 2020, the company assisted with equipping a new COVID treatment section in the Podolsk city hospital, and also donated more than 2 thousand packages of Polyoxidonium to medical centers in the region for the preventive protection of doctors working in the “red zones”.