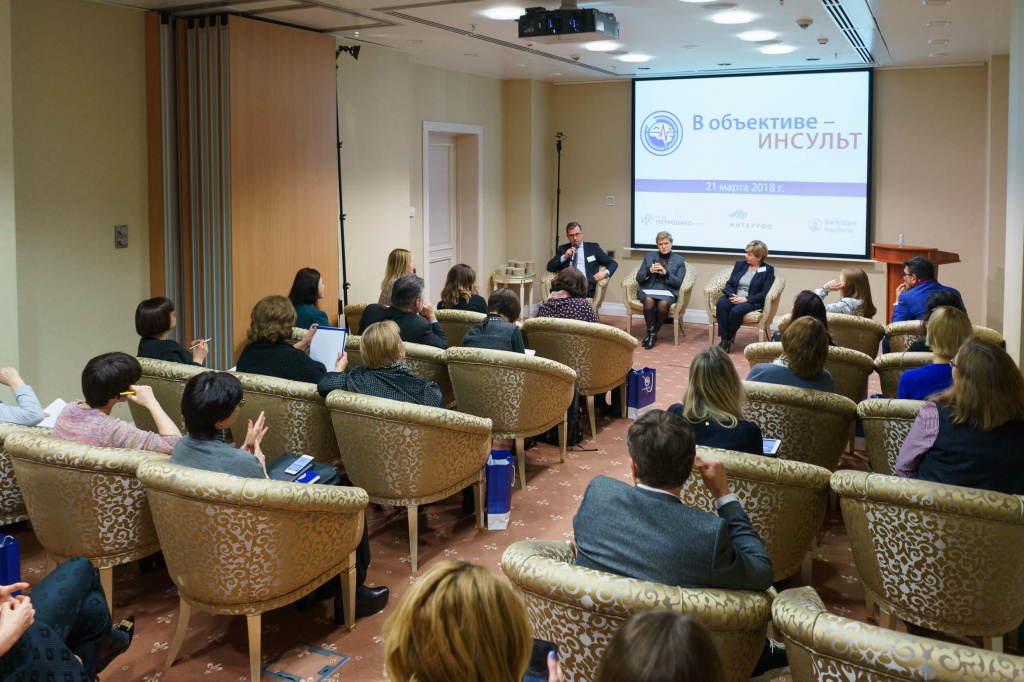 On 21 March 2018, Moscow was the venue of a media event ‘Camera Lens Focuses on Stroke’ hosted by Boehringer Ingelheim, Petrovax Pharm, and Interros Group.

The participants saw the movie ‘The Diving Bell and the Butterfly’ by Julian Schnabel about the life of a patient who has suffered a stroke. A discussion followed the screening.

The biopic movie is based on the best-selling memoir by Jean-Dominique Bauby, the former editor-in-chief of Elle magazine in France. At the age of 43, Mr. Bauby suffered a stroke that left him conscious but paralyzed, with only his left eye remaining functional, and he composed the memoir painstakingly by blinking that eye to sel ect letters on a chart.

Galina Ivanova, Chief Specialist in Medical Rehabilitation of Russia’s Ministry of Health, commented on the movie. She touched upon the issues of medical aid management for patients with acute cerebrovascular disorders, their rehabilitation as well as the role of their friends and the family in overcoming the stroke effects.

The event offered the journalists an opportunity to take part in shooting a video ‘Medical Journalists on Stroke’ and share their knowledge on the disease.

Every 2 seconds, a stroke event occurs in the world, with a patient dying of stroke every 6 seconds. Thus, annually, 15 million people face this disorder that claims the lives of about 5 million patients per year1. According to Russia’s Ministry of Health, 450,000 stroke cases were recorded in Russia in 2016. At that, 70% of the stroke survivors become disabled, with 1 in 5 patients requiring constant care2. 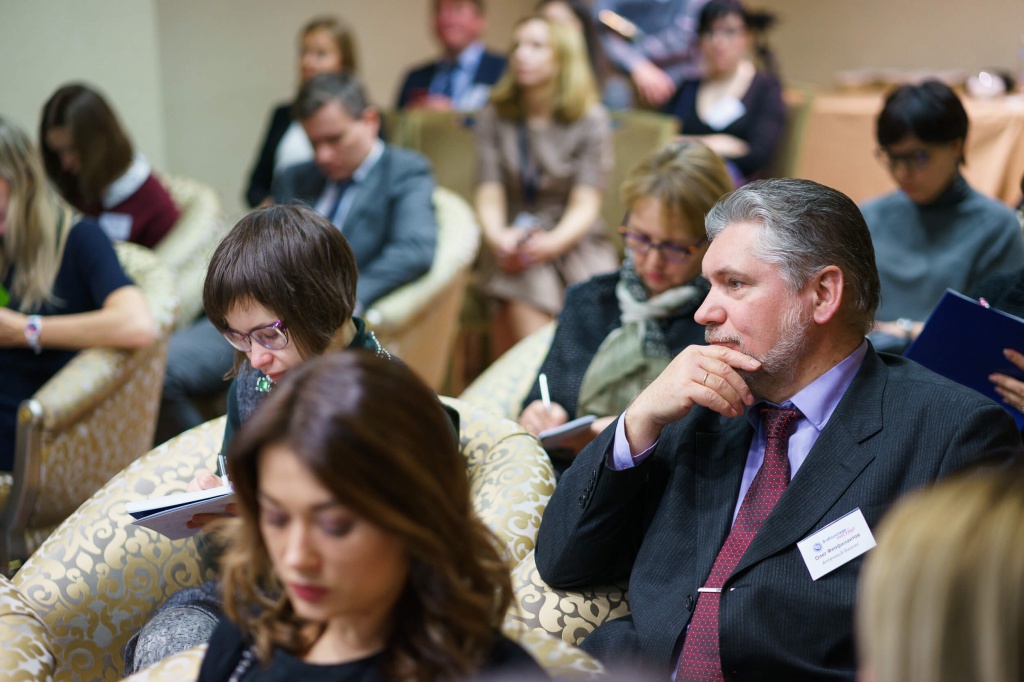 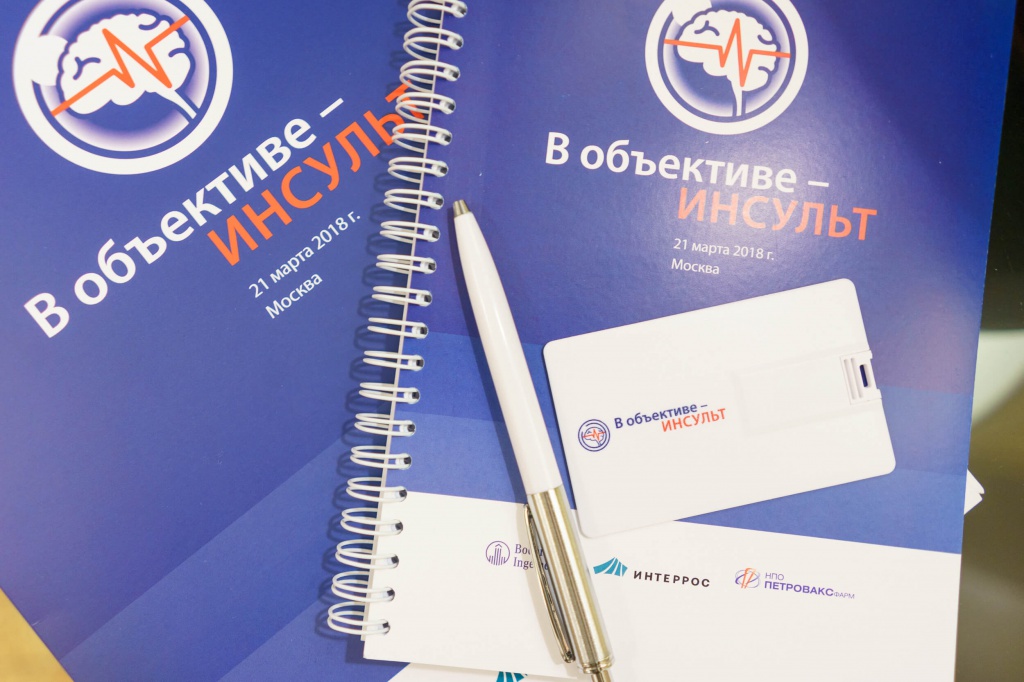 An outcome forecast for a patient after ischemic stroke depends on the time of thrombolytic therapy. If the therapy is provided within 1.5 hours, 1 in 4–5 patients will have a chance for complete recovery; such therapy received within 3 hours gives a chance to 1 in 9 patients, and within 4.5 hours – to 1 in 14 patients. The rest of the patients may present with the signs of improvement after thrombolysis, but without complete recovery in store for them. Therefore, it is important to timely diagnose the disease and provide treatment with state-of-the-art medications.

A joint project pursued by Boehringer Ingelheim and Petrovax Pharm (an Interros Group company) is aimed at localization of innovative thrombolytics in Russia. In June 2016, upon signing a cooperation agreement, the companies set to transfer and implementation of secondary packaging manufacture technology and analytical methods of quality control. Already back in August 2017, the first commercial tenecteplase batches to treat myocardial infarction were launched to the market. In February 2018, the first batches of localized alteplase for ischemic stroke and myocardial infarction were released.

The officials representing the host companies related their success stories associated with thrombolytics localization in Russia.

This year, Boehringer Ingelheim marks the 25th anniversary of operating in Russia. During all that period, we have helped and still help patients overcome a range of severe diseases, including stroke. We have every reason to be proud of our thrombolytics that help control this severe disease, save lives, and contribute to reducing disability rates and improving quality of life. According to our sources, over the past 8 years, the frequency of using systemic thrombolysis procedures in stroke increased more than 10-fold. There are the fates of real people, their families, and close friends behind these figures. The project involving thrombolytics localization at Petrovax Pharm’s facilities in another proof that the Russian market is very important for our company. Human health is our top priority

Pavol Dobrocky, Managing Director of Boehringer Ingelheim Russia
Petrovax Pharm – Boehringer Ingelheim partnership is an example of successful cooperation that really contributes to the development of the local pharmaceutical industry and the implementation of the National Healthcare Development Program. This project is unique both in terms of high-tech solutions and the implementation timeframe. Over the past 1.5 years, we went to considerable lengths – fr om audits and staff training to equipment upgrade and transfer of technologies as well as science-intensive quality control methods. We have good opportunities for upscaling production, and we think highly about the project’s export potential
Elena Arkhangelskaya, President of Petrovax Pharm